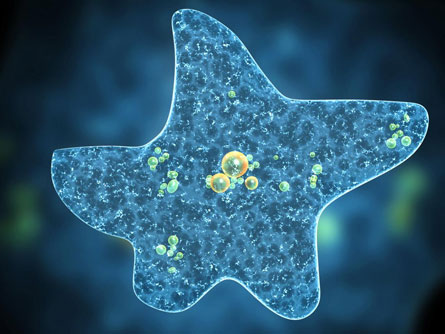 Some people have never heard of it, others blame it for every tummy trouble they get. So what is it, where does it come from what does it do?

There are many different species of amoeba. Some simply crawl around in the bottom of ponds and swamps minding their own business. They are actively encouraged in water treatment plants to remove bacteria from water. About half a dozen species are found in humans and each species has different strains with different habits. There is even a species that can cause eye disease, but most are found in the intestine.   Some form cysts easily found under the microscope. Others cannot be found by simple microscopy. Some are probably harmless, some cause significant disease, some are controversial. Even the spelling is controversial.

What is certainly known is the species called Entamoeba histolytica can cause amoebic dysentery and if it crawls out of the intestine can cause abscesses. This is actually pretty rare. Most of us have seen one or 2 cases of amoebic liver abscess; the other graphic complications are mostly seen only in ancient textbooks.  One species has bigger cysts seen under the microscope, and is probably harmless. The controversy is over other species that look indistinguishable from histolytica under the microscope. Do they cause disease or are they harmless? If amoebic cysts are found under the microscope should they be treated?

2 very common reasons for seeing a doctor are vague bad guts and tired all the time. It has probably affected every visitor to Africa at one time. Some of them have nothing objectively wrong. In about half we find one of the common parasites. Some have Bilharzia, some have giardia, and maybe 30% have amoeba cysts found in the stool. So do these cysts that might be E. Histolytica or might be another species cause the tiredness, the on/off stomach pain, the vague not quite diarhoea?

Should be easy to find out, right? Treat them and see what happens.

So we have done, for many years. And from our perspective most of them got better. And many people who live here say I think I have amoeba again because I feel the same way as I did 2 years ago when you treated it and I got better. And we check, and they do and we treat it and they get better. And still the text books say that people passing amoeba cysts do not have symptoms, they call them “symptomless cyst passers” and they should be left alone, the cysts stop after a few months. Or years.  Maybe.

In 2016/17 we tried to do some research: we looked at stools in everyone who had stomach pain, on off diarhoea or tired all the time. Some had Bilharzia, some had giardia, some had amoeba cysts and some all 3. We found about 150, around 30% of the people who felt tired and had bad guts, who had only amoeba cysts. We also looked at stools of some quickly recruited street boys, and found 60% had amoeba cysts, and looked at the results of people requiring a stool test for a routine medical exam: about 10% had cysts. We treated all the ones with amoebic cysts found in the stool, and asked them to come back and tell us if they were well.

The only indisputable result we found was that most people don’t come back for follow up. Those who did return came back because they weren’t better or because they had a cold or back ache or just happened to be coming back anyway.  Or worked here.

Conclusion? We can’t prove those amoebic cysts passers with vague bad guts and tired all the time are unwell because of the amoeba. However it certainly looks that way because when treated most of the ones who came back were better. It seems a bit like paediatricians being asked “does teething cause fever?”  Paediatricians with children say yes, paediatricians without children say no. Doctors who live in the tropics think amoeba cysts cause fatigue and stomach pain, and those who don’t live here don’t.

Which is why I am writing this article because we find amoeba in a lot of people who feel vaguely unwell.

An adult free living amoeba is a single cell about 50 to 80 microns across and moves by sort of pouring itself into bits of itself sticking out called pseudopodia. It just means false legs in Greek. Nice ones eat shit or bacteria. Nasty ones eat blood and tissue. If they were 20 thousand times bigger they would be a lot scarier than daleks, proving that sci-fi writers don’t need an imagination only a microscope.

They reproduce by binary fission and as they get slowly washed down the intestine and the environment becomes less amenable to moving using pseudopodia, they round up, turn into cysts and are passed in the stool. The cysts are fairly resistant to drying and chemicals and can contaminate soil, fingers, door handles and bank notes for a few weeks or months.

In most people the infection lasts a few months or a few years: somehow the immune system finds out about them, decides it doesn’t like them and makes the environment even less amenable. Logic tells me that the constant immune stimulation either by the amoeba itself or its toxic excreta is what makes us tired, have on off diarhoea and vague abdominal pain.

The pain is most common in the low right side, actually in the same place as the pain in acute appendicitis. It is the amoeba’s favourite place in an area of gut called the caecum where the liquid small bowel content pours into the large bowel. Don’t fall for the “its appendicitis” trick: there are a lot more signs needed to diagnose appendix then just pain in one place.

Another problem is that some other parasites can also cause abdominal pain, vague bad guts and tired all the time. Bilharzia is very common. Giardia is nearly as common as amoeba and is much more difficult to find. Others with similar problems have intestinal yeast overgrowth. In countries which don’t have parasites anyone with tired, vague bad guts and pain is told they have IBS. Interestingly some years ago in Australia someone found that 50% of people told they had IBS had amoeba, and got better when treated. And walking around upside down and having diarrhoea is pretty unpleasant.

I think you can diagnose them all by smell. Giardia farts smell like rotten eggs, yeast doesn’t smell bad at all and amoeba farts smell like a dead rat. Unfortunately the science of olfactory diagnosis is not yet recognised.

Bottom line? (if you don’t mind the expression). If you feel grot, tired, on/off loose and never quite right bad guts, if you have been told you have IBS but don’t want it, or you fart like a skunk in a bunk, come in and see us with a stool specimen. If you have amoeba we’ll treat it and see if you get better. If the Bilharzia rapid test is positive we‘ll treat that. Intestinal yeast is also easily treated, and if we don’t find nothing nowhere we just guess it’s giardia and give treating that a whirl too.

The good news? The drug we use for treatment is not absorbed, so it has no side effects, you can drink beer and get pregnant. Just don’t try and do both at the same time because you’ll spill the beer.